Betty Friedan was the founder of the National Organization for Women (NOW) and National Women's Political Caucus (NWPC). She influenced the start of Second Wave Feminism and advocated for an increased role for women politically. 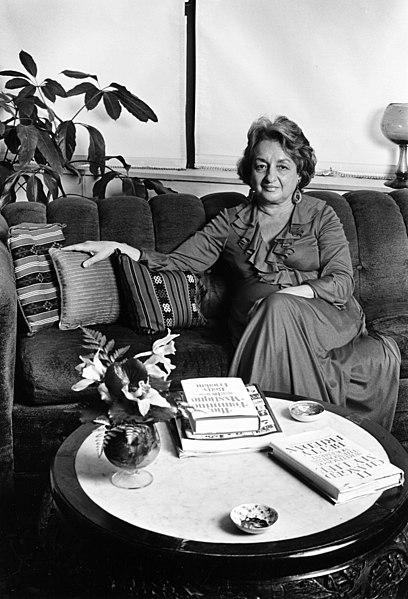 Betty Friedan as photographed in her home ©Lynn Gilbert, 1978. Source.

In the early 60s, the media always advocated that a woman’s job was to take care of their husband and child. Women’s prosperity depended on their husband’s career, children’s education and the way she managed her house.

During the 1960s, the Civil Rights Movement influenced many white and middle-class women to protest for greater women’s rights--known as second-wave feminism. Most of the members were married women who found the traditional roles of ‘housewife’ and ‘mother’ unfulfilling.

Betty Friedan was one of them, she started her research and wrote a book which was a best-seller that gained support of many women who agreed that being a housewife had left them unsatisfied.

In 1966, Betty Friedan co-founded National Organization for Women (NOW), which set an agenda for the feminist movement.

Betty Friedan was born in a family where she saw how women’s potential intelligence and strength had been wasted through her mother’s life, therefore Betty did not want to follow her mother’s footstep.

Betty Friedan chose to work as a reporter in New York after she graduated in 1942. Next, she became a writer for the UE News where was a start point of her later interest on Women’s right.

In Friedan’s personal life, she had three children after her marriage with Carl Friedan where she became a housewife just as any other married women do, but this did not resist her from explore and contribute to the society.

Betty Friedan was died of heart failure on February 4, 2006, in Washington, D.C. She had spent her whole life for further more contribution to women’s right.

Today, She is remembered as a pioneer of feminism and the women’s rights movements.